On Friday 10th of June, the Grade 6 boys and girls went to Arnold’s Creek Oval to compete in the Lightning Premiership for football against other schools from Melton.

Some of the schools we played against included Heathdale Christian College, Kurunjang Primary School, St. Catherines Primary School and Melton Primary School. This meant that we played 4 games. We won all four games and were undefeated going into the semi-finals.

Thank you to all the boys and girls that played and the parents that came to support us and to our coaches Mr Clarke and Mrs Fahey.

The team made the Grand Final and we had to do rock, paper, scissors to see who would bat first. We won and decided to bat. At the end of the first innings, we were tied with Kurunjang 5 all so we played a second innings and sadly we lost 9 runs to 11.

The girl’s Teeball team competed against other Melton primary schools. We won most and lost a couple of our games. Our first game we played against Coburn Primary, it was a tight game but it was fun. Next we played Wedge Park, it was really competitive but we still laughed lots. Unfortunately we did not win but we tied 28 all.

In the Lightning Premiership, our first game was against Melton Primary and unfortunately they did not turn up. We played St. Catherine’s, Kurunjang Primary and Melton South Primary. We had lots of fun but the weather didn’t help us. We made the semi finals but sadly we lost against Kurunjang. Our team were still very happy and proud of ourselves for making it far in the competition.

On Friday the 10th of June the Girls and Mixed Netball teams went to Blackwood Drive Netball courts to compete against other schools.

We would like to thank Mrs. Herring, Miss Conroy, Mr. Allison for training, supporting, and cheering for both the Mixed and Girls Netball Teams. We would also like to thank all the teachers and for organising the event. Congratulations to all the players who played in the Lightning Premierships and granting St Anthony’s a well deserved victory! 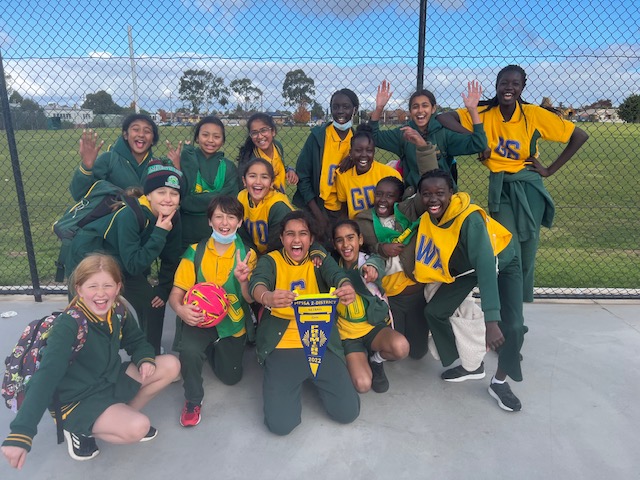