In his first inaugural address, President George W. Bush used the metaphor of the road to Jericho in pledging the United States of America to a goal of personal responsibility for the welfare of all. We would not cross to the side of the road to avoid getting involved in our neighbour’s suffering. Americans would not be guilty bystanders, unwilling to risk the dirty, messy business of human compassion. This speech made some people uncomfortable. Not everyone wants to invest in human misery just because it’s there. If only being a Good Samaritan were always as simple and sanitary as writing a cheque!

But the Samaritan in the parable does a lot more than pick up the tab for a stranger’s misfortune. He ministers to him personally, investing time and care and human feeling into someone who happens to be an enemy of his people. The business of compassion smears the neat categories of responsibility. It leads where we may not expect or want to go.

Is there someone who may need your compassion at this time?

How may you have to go across “enemy lines” to help?

Pray for the courage to get your hands dirty when you encounter human suffering.

Jesus said, “What do you think? Which of these three became a neighbour to the man attacked by robbers?” “The one who treated him kindly,” the religion scholar responded. Jesus said, “Go and do the same”. 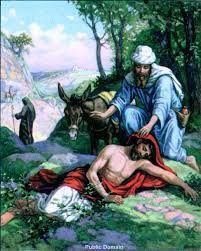 There is a story about Martin, a cobbler. He looked forward to the coming of the Lord and he felt he would soon come to visit his shop. He busied himself getting ready, but he was often interrupted. He saw a child getting into trouble in the market place, so he went out to help him. Then he saw a poor woman who was in need of better shoes. He called her into the shop and saw to her needs. After this there was an old man who looked frozen. He invited the man in and gave him a warm drink. Martin would have liked to have prepared more for the coming of the Lord but he just ran out of time. Martin reached out to all who came his way. That night Martin had a dream in which he saw the Lord. The Lord told him how he had visited him when the child needed help, when the woman needed shoes and when the old man wanted some warmth. In caring for his neighbour, Martin met the Lord.

You lead us out to serve, O God.
Give us courage to help the disadvantaged.

Give us the willingness to offer a second chance.
Give us patience when trouble comes.

Give us wisdom when choices must be made.
Give us peace in the midst of turmoil.

Give us your graceful presence when all else fails.
Amen.